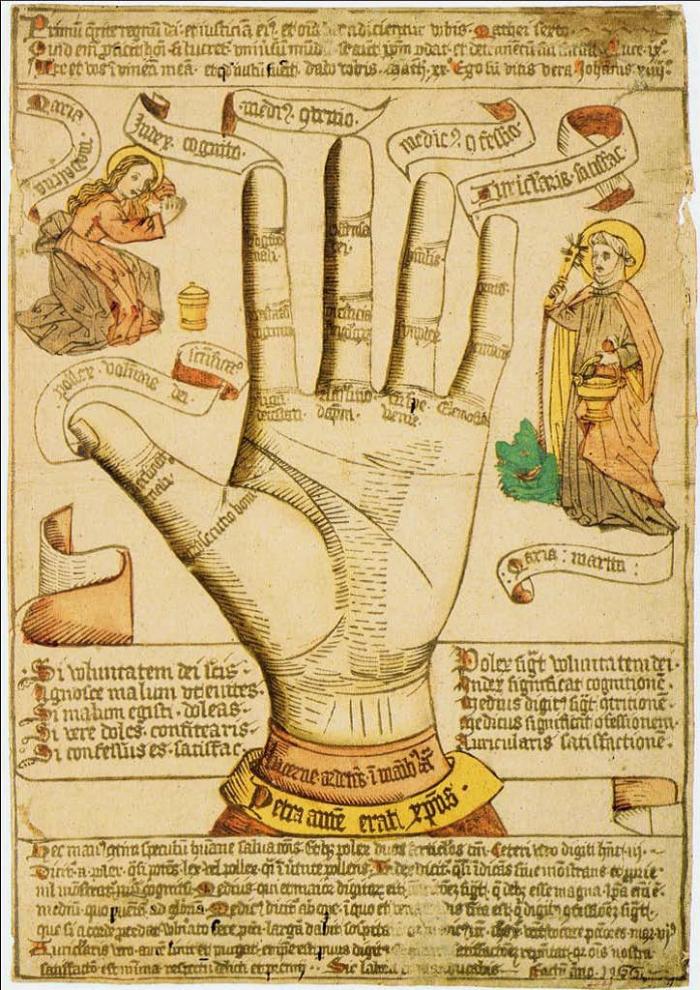 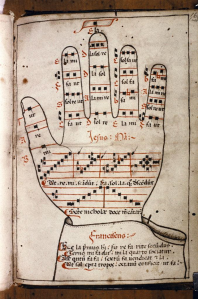 Figure 3 Allegorical Diagram of the Path of the Rational Soul, woodcut April 1482

Figure 5 God the Father with a Diagram of a Man. 1486 woodcut 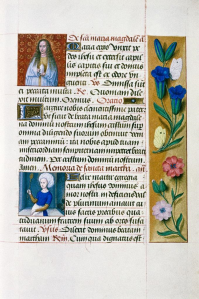 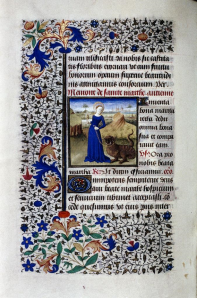 The Hand as the Mirror of Salvation is a woodblock print featuring text and imagery that demonstrates the importance of mnemonics and didactic art forms for personal devotion in fifteenth century Germany.  An open hand, palm facing the viewer, is the central focus of the piece.  The hand features text at the divisions of the fingers that suggest an instructional quality, almost as if each finger enumerates a different didactic point. Two small figures accompany the hand, one on the right and the other on the left. These figures are identified as Mary Magdalene and St. Martha by radiating text banners.  The figures supplement the goal of the piece, to instruct the viewer in types of pious devotion that contemplate the requirements of salvation. A greater discussion of the iconology of Mary and Martha is necessary to a full understanding of the piece, but first one must consider the broader context of a work like this.

It is significant that this piece is a woodblock print.  Prints were created in multiples and for distribution. Their affordability in comparison to other works suggests they were created for a larger audience.  They are therefore deeply revealing with respect to common and popular practices in the society of fifteenth century Germany. These objects, though they were created in multiples, were highly personal because of their ownership by individuals. The inclusion of Latin text in this print suggests that the ownership must be by a literate and presumably religious figure, since Early New High German was the vernacular language in Germany at this time.  Prints reflect their intimate, private character in their contents and were typically embedded with symbolic and didactic religious imagery related to contemporary trends in personal devotion.[1]

The use of imagery accompanied by religious text was common in the art of the Middle Ages and early Renaissance.[2]  Images fulfilled the desire to make religious history and theology mentally accessible. Illustrated prayer books and prints were abundant in fifteenth century German art and promoted and instructed their users in matters of belief and devotional practice. More specifically, pictorial diagrams like the “hand print” were often used in explanatory or instructional works, combining didactic texts and information with familiar imagery that guides the viewer/readers understanding, for instance using the body as a diagram of the zodiac (Fig. 1), as in the famous Limbourg brothers’ manuscript, the Tres Riches Heures.  The body or the hand is a well-known and intimately familiar organizational framework for the viewer and therefore is a powerful aid to memorization and instruction. In another highly relevant example, a Franciscan creation utilizes the imagery of the hand as an aid to memorization of a hymn (Fig. 2). Bars of music are shown instead of text at the divisions of the joints in the fingers. This piece would have been held and used for personal devotion purposes.

This fascinating trend in didactic or informational imagery reflects on the habits of mind of the late Middle Ages, an age that still needed to make tangible abstract notions of scientific and religious thought. We see this trend in an allegorical diagram of the path of the rational soul (Fig. 3).  This woodcut’s imagery, cluttered text scrolls, instructs the viewer’s eye through the use of arrows to plainly explain the correct religious course a person should take to attain salvation.  Similarly, this diagrammatic tendency is seen in a woodcut that is visualizes as a ladder the stages of spiritual life (Fig.4); the object features a circular diagram which articulates clearly the steps to attain salvation. These images aim to simplify the complexities of religious thought through instruction and familiar imagery, which is a strategy also on display in Hand as the Mirror of Salvation.

The hand as a diagram in this piece is used to instruct and to promote memorization of the stages of repentance.  The hand is a very compelling mnemonic aid, because the use of hands in religious practices is of the utmost importance, for instance in the taking and giving of alms, the taking of the Eucharist, prayer, and the giving of blessings.  Apart from religious purposes, one uses hands as an aid in counting; this utilitarian functionality is harnessed to promote the deep spiritual purposes of this piece.

The text encircling the wrist summarizes the spiritual holding of the print: “If you know the will of God, recognize evil, so that you may avoid it. If you have done evil, regret it. If you regret it, confess it.  When you have confessed it, do penance.”[3] The five stages of repentance are depicted one on each finger; beginning with the thumb is recognition of God, recognition of the existence of evil, avoidance of doing evil, confession of doing evil, and finally with the little finger, penance. The owner of this piece would have counted off on his fingers each stage, while perhaps sharing this device with others.

Accompanying the depiction of the hand are images of Saints Mary Magdalene and Martha.  This iconography would have been well known to the people of fifteenth century Germany.[4]  Mary and Martha are pious sisters described in the Gospels, in which their devotional roles are contrasted.  Mary, who anoints Christ’s feet, was seen as a more contemplative devotee.  Martha instead plays an aggressive, active role, which is exemplified in her involvement in the raising of her brother Lazarus and the preparation of a meal for Christ and his disciples.[5] According to the book of Luke, Martha asked for assistance from Mary in the preparation of the meal. Christ asserted that Mary was fulfilling her role by anointing his feet and Martha should satisfy her own role.[6]  This proclamation was used as a justification for the divisions in medieval society between people who played active and contemplative roles, for instance between monks and clergy who prayed and common the people who, like Martha, labored actively.

Mary is situated on the hand’s right side; often this placement on the right is associated with a greater holiness than the left, as is often seen in religious imagery in which pious figures appear at Christ’s right hand while wicked ones appear on the left.  A relevant example of this left/right division is seen in an image of God the Father with a diagram of a man (Fig. 5.)  The right side of the figure, with its foot terminating in a crown, is identified as “Good” (bonum).  The left side, with its foot terminating in a hell-mouth, is labeled, “Bad,” (malum).  Mary is intimately associated with the hand by her placement between the thumb and the forefinger.  She is depicted as kneeling with the ointment jar placed in front of her in an act of humility and devotion. This is consistent with the biblical references in which she anoints Christ’s feet.[7] Mary is fulfilling her role as a contemplative devotee.

Saint Martha, who is by no means wicked, is nevertheless less intimately associated with the hand, as she appears to the left and outside.  She is depicted standing bearing what appears to be an aspersorium and an aspergillum, which are devices to hold and sprinkle holy water.  A green dragon-like creature sits chained at her feet.  Often Martha’s iconography follows a more domestic role, for instance her holding a mop or ladle, which follows biblical narrative of her being the hostess to Christ (Fig. 6).  The imagery included in this piece is interesting because it follows The Golden Legend rather than biblical text.[8]  According to The Golden Legend, Martha moved to France shortly after Christ’s death, specifically to a town that was tormented by a dragon.  The townspeople attempted to no avail to kill the dragon, which they named Tarasque.  Martha was compelled to help the people and had success by sprinkling holy water on the beast (Fig. 7).  Martha’s victory over the dragon converted many people to Christianity, and she stayed in the town and established a church.[9] Whether Martha is depicted as the hostess to Christ or victorious over a dragon, she is fulfilling her role of an active devotion.

In The Hand as the Mirror of Salvation, the hand, which instructs concerning the attainment of salvation through repentance of sins, is complemented by the active and contemplative figures.  These relationships suggest the viewer partake in one of the two roles.  A certain degree of privilege is shown to Mary Magdalene, by her placement in the image, although Martha is also revered for her pious actions.  The hand as a diagram complemented by the figures of Mary and Martha becomes a powerful didactic image that instructs the viewer to participate in penance while compelling him or her to consider the pious roles, active and contemplative, open to those seeking salvation.